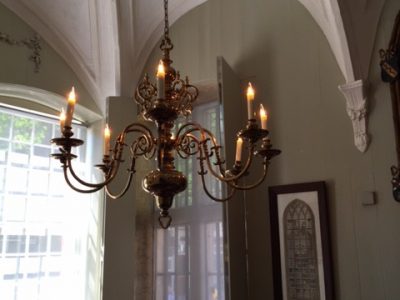 The Oude Kerk is the oldest building in Amsterdam, consecrated in 1306 with Roman Catholic Saint Nicolas as its patron saint. The Iconoclastic Fury raged here in 1566. In the following years, it gradually got a serene, sober look as the result of new religious ideas. The Oude Kerk was built, expanded and rebuilt in the numerous centuries until solidifying into its current form, for which it is now known.

In the context of aesthetics and sustainability, the church council decided to change the chandeliers in the church.
The existing chandelier lighting was no longer bright enough and was removed, in consultation with W3 Product E-Candle and replaced with the LED E-Candle De Luxe, with a very warm hue.
By doing so, the Oude Kerk has established connections in its programmes between heritage and art, past and present; and it thus offers an opportunity to contemplate and be amazed. With the restoration of the historical chandeliers in the church, it also establishes a link to modern art that has entered a relationship with the cultural-historical value of the Oude Kerk.