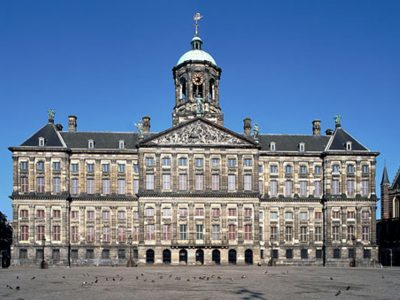 The Royal Palace of Amsterdam is located on Dam square in the centre of Amsterdam. The palace is used by the Royal Family for receptions and also as a museum.

The chandeliers that have lit the Royal Palace since the era of Louis Bonaparte had been removed in a previous restoration and stored in crates in the attic. Restoration architect Krijn van den Ende, who led the last restoration, said: “A palace like this is unthinkable without chandeliers.”

Based on old photographs from the 19th century, the chandeliers were reassembled and hung in the rooms where they had originally been installed.

The fire-gilded chandeliers and wall chandeliers were remounted on the walls of the upstairs floors.

Van der Ende says: “Those chandeliers are perhaps the most important link between the 19th-century furniture and the 17th-century interior.”