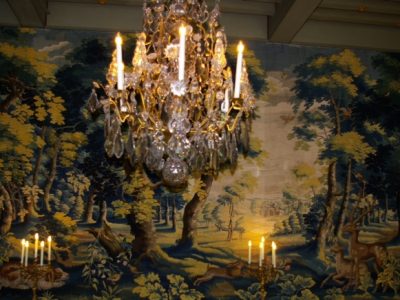 Castle Museum on the river Vecht

Zuylen Castle is one of the oldest castles on the river Vecht, just outside the city of Utrecht. The castle has a rich family history with influential residents – in which strong women play a prominent role, such as writer Belle van Zuylen. The interior of Zuylen Castle consists almost exclusively of original furniture, paintings, chandeliers and other objects.

The chandeliers, candelabras and mirrors are from the 19th century. The space has always been used for major receptions, though the interior has varied through time.

The most important room is the Gobelin Room, where a wall tapestry by Delft weaver Maximiliaan van der Gught has adorned the walls for over three centuries.
The chandeliers and candelabras are from the 19th century, which we restored and in which we installed the E-candle Royal.

The space has always been used for major receptions, though the interior has varied through time.
Those interested in a very romantic wedding can rent this stylish room to do so.