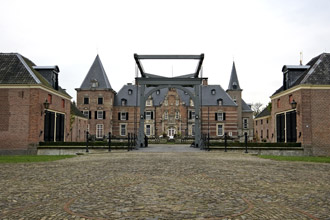 The oldest mention of Twickel was in 1347, when Herman van Twickelo purchased the Eysinck estate in Delden. This home later became the Twickel Castle. Twickel was consecutively inhabited by members of the Van Twickelo family (from the 14th – 16th century), Van Raesfelt family (16th and 17th century), Van Wassenaer Obdam family (17th – 18th century) and the Van Heeckeren van Wassenaer family (19th and 20th century). The last owner bestowed Twickel upon a foundation, which still manages the property today. Until her death, the baroness herself was the CEO of the foundation.

The exquisite chandelier above the stairs got new E-candles.
The chandeliers in the Salon, Droste Room and the Library were also restored.
The E-candle Royal was used to do this.
First, the fire-gilded bronze on a few chandeliers was cleaned with a special liquid.
Then we replaced the old cotton wiring, majorly increasing the fire safety of this lovely castle.