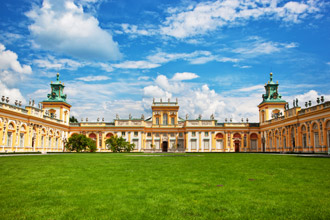 Warsaw Wilanów
On the south side of Warsaw is Wilanów: a gorgeous park with a palace and various annexes. In the 17th century, John III Sobieski commissioned Wilanów to be built in Warsaw. It was to become a modest castle, with a beautiful garden. Throughout Warsaw’s history, the Wilanów was adapted and expanded. Along with Łazienki Park, Wilanów is now one of the most beautiful parks in Warsaw.

Candles: a danger to the art collection

The Wilanów Palace Museum has a major focus on the conservation of this formerly royal castle. The daily battle against the biggest threats to the art collection, such as fire, temperature and light requires major efforts.

The rooms used to be lit with real candles. These were placed very carefully, due to the fire hazard, but also smoke and soot that was difficult to remove. In the previous century, a lot was replaced by electric lighting.

A new electrical system was installed in the apartments. Based on 6 volts instead of 220 volts. The E-candle Royal with LED candlelight now offers atmospheric lighting that resembles the candlelight from the era of King John III.

The LED lighting is not only fireproof, but also contains no UV light and is thus safe for the valuable tapestries.